It’s In The Stars… A Night’s Sky Colour Scheme

Whether tiling a bathroom from head to toe or painting your kitchen and hallway, let tiles and paint be the feature that dictates your colour palette. In need of some fresh creative direction? Wait for the sun to set and then turn your gaze skyward to be inspired by the velvety, star-speckled blanket that is the night’s sky.

The clue is in the name. A night’s sky palette harnesses inky abyss depths with saturated tones, and the occasional iridescent sheen suggestive of moonbeams and starlight. Consider using pattern to cut through the intensity of colour, favouring geometric star-like shapes, be they printed onto the tile or the tile formation itself.

The hues to include

Principally, midnight black for the boldest of decorators. Take it one level down with inky blues – still undoubtedly nocturnal but with a degree more warmth. Remember that this is palette that honours the enveloping, beguiling nature of nightfall, so try not to be tempted to lighten it too much; any blues should be closer to black than royal blue. A glazed, glossy tile will provide some lift if you’re nervous about creating your very own black hole.

The tiles & paint to try 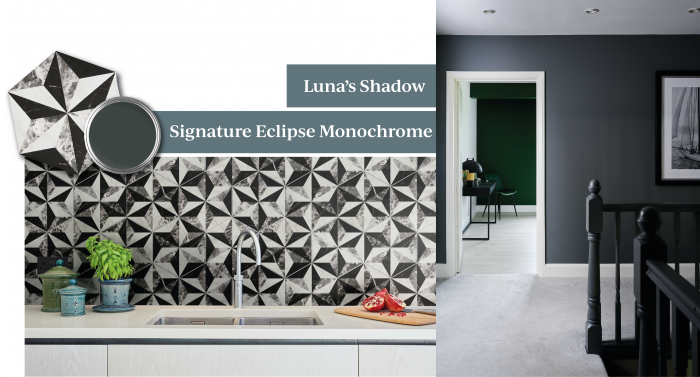 Star bright: go maxi on the star story with the hexagonal Eclipse tiles. Each one is made up of contrasting prisms in black, silvered grey and white that combine to give the illusion of a three-dimensional star. Imagine a kitchen splash back or a bathroom’s shower area with these (or our Nova tiles in deep blue or graphite) on full view. Star-gazing indeed… If you’re on the braver side, team our Eclipse tile with the mysterious and moody colour of Luna’s Shadow which has suitably been named after the Latin word for moon. 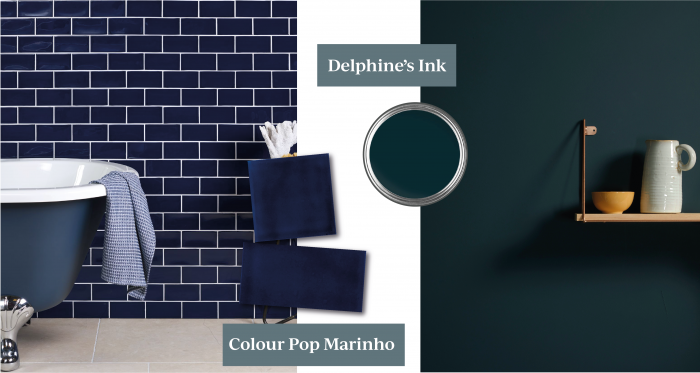 Blue velvet: deep blue isn’t the reserve of the sea alone. Our Colour Pop Marinho tile captures just the right depth of colour comparable to a clear night’s sky illuminated by the full moon. Opt for a lighter grout and imagine the blue is interrupted by shooting stars. Our rich and dark blue Delphine’s Ink paint echoes a still sky and adds impact to a space, so much so, that you’ll want to gaze at it all night. 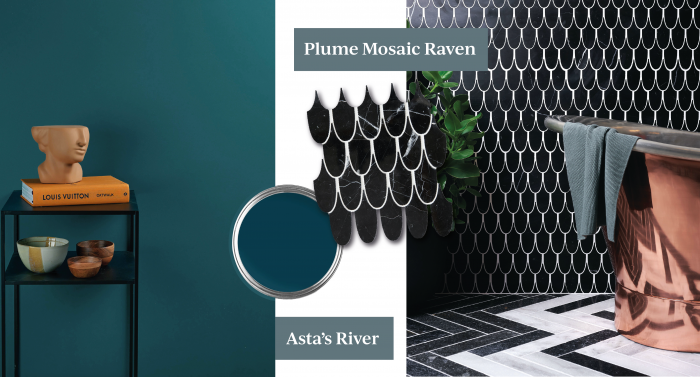 Dramatic darkness: a dramatic marble, the Plume Marble Mosaic in Raven are your go-to for a pitch-black, starless sky. While you can use them on all surfaces, for a night’s sky palette, we like them on walls teamed with a deep blue paint like Asta’s River. Together, the two make a powerful showcase of their majestic muse.

Discover our Pinterest board full of beautiful tiles and paint.