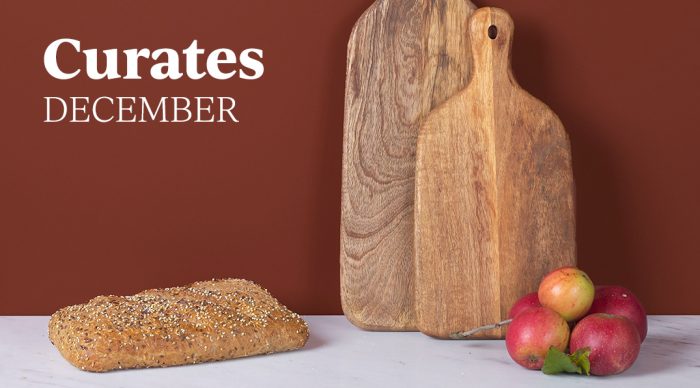 Time in front of the television, decorating inspiration to take you into the new year, and the ones to watch on Instagram to fuel your feed as you idly scroll through post-nap on Boxing Day afternoon – sounds like December does it not? From all things spice for your new seasonal paint palette to how to renovate your bathroom à la British designer Rita Konig, this month’s instalment from the Ca’ Pietra team’s notebook is a feast for all the senses. And is that now what December’s all about?

November’s worked its nurturing magic and as we write this sipping a gingerbread-spiced latte (we can never resist, year after year) we note that we’ve developed a serious seasonal crush on spice shades. We’re not alone – the catwalks predicted spice as a major colour trend for AW20, and they weren’t wrong. Warm and comforting but earthy and grounding at the same time, they’re everything that we seek at present; colours that are at once cosseting and reassuring. Less pillar box red and more paprika or sumac, less tangerine orange and more cayenne, the colours to which we’re gravitating right now are Asher’s Cranberry, Cassia’s Terracotta and Ebba’s Rust.

Yes, there’s always something new on Netflix to tell a friend about, from the Queen’s Gambit to Hugh Grant and Nicole Kidman’s new thriller series, The Undoing. But right now, we’re hankering after the familiar – aren’t we all?

This December, or early-December at least until Christmas-themed shows dominate our evenings, we’ll be going back through the archives to find a former series that we loved then and just as much now, as we watch the re-runs. Brought to our screens by architect Piers Taylor and national treasure Caroline Quentin (who happens to be a bit of an interiors buff as well as a property developer, who knew?), in The World’s Most Extraordinary Homes, they travel across the globe exploring, as the title suggests, exploring real homes that are an architectural triumph. The interiors hardly fall short either and will undoubtedly inspire your own schemes, whether for the here and now or the one-day property. One for the design-obsessed, no question.

93,000 followers and counting, and it’s no wonder. British interior designer Beata Heuman has established herself (and her international interior design studio) as a colour-driven pro who takes hold of heritage and sees it through her ‘comfortably modern’ (in the words of House and Garden magazine who awarded her designer of the year back in 2018) perspective. Her Instagram feed is then naturally a rich tapestry of projects new and old as well as a few of her own Hammersmith home (recently featured in industry favourite, The Modern House). With one swift scroll, you’ll be greeted with red pinstripe sofas set against ochre yellow blinds, a bright blue chequerboard floor upon which there’s an beguiling blend of contemporary and cane pieces, an other-worldly marine green and glazed downstairs loo, and one or two of the artist herself, because it’s always nice to put a face to a name.

Recently, we read a piece in House and Garden magazine that brought interior designer Rita Konig’s glossy green bathroom in her west London flat forefront and centre of mind all over again. From the deep forest green tongue and groove panelling on the walls to the way she’s continued it, albeit in a different direction, across her bathtub, it truly is a head-to-toe verdant immersion. And we can vouch that it’s even more impressive and cocooning in person. It got us dreaming up ways to reinterpret it through paint and tiles should you prefer to mix up the textures and finishes in your own bathroom. Colour-wise, try Hunter’s Leaf that’s as dominant and moody as that seen in Konig’s home. We’ll be pairing it with Carter Palm Ceramic – a perfect match in depth and character. Try paint on the walls and tiles on the bath surround and it’ll draw your eye to what is surely the bathroom’s defining feature – the tub.